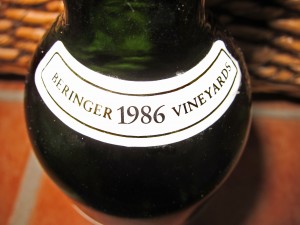 To join in the fun of Open That Bottle Night  I decided to open a wine special to me- a 1986 California Cabernet Sauvignon (this was the year I graduated High School).

Since I am often asked, “Are old wines better?” AND I had a younger   Napa Cab downstairs in the “cellar”- I opened them both. 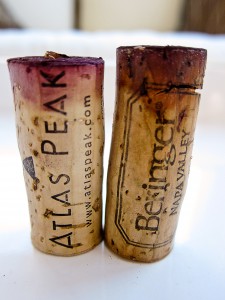 About Older wines… Approximately 95% of wines are made to be consumed within 1 year of their release (when they are first on shelves).

As a general guide, the wines that usually reward aging are the robust reds – the better Bordeaux, Burgundy and Rhones from France, their counterparts (Cabernet Sauvignon, Merlot, Pinot Noir and Syrah) from the New World; sturdy Italian reds like Brunello and Barolo; and the rich, strong dessert wines like Port, Sauternes and the fine late-harvest Rieslings from Germany.

On to the wines…

As you can see from the corks above there is a big difference in the color of the wines. Whites wines get darker as they age but red wines actually get lighter and less saturated (less colorful) as they age.

The 2006 Atlas Peak in the glass, was purple and opaque but the 1986 Beringer was more transparent and brick orange-red in color.

Tasting the wines proved they tasted as different as they appeared. 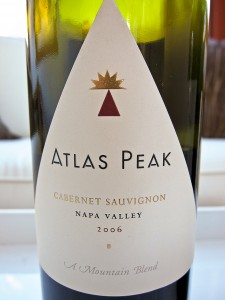 Atlas Peak 2006 is still a young wine and has some noticeable tannin that will soften as it ages. It had VERY ripe flavors of dark fruit (blackberry, currant), almost jammy, with noticeable OAK.

Made from Cabernet Sauvignon from different Napa Valley mountain vineyards it is a great wine for the price (around $25). 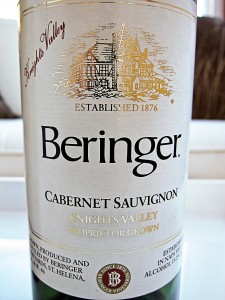 The 1986 Beringer, Knights Valley was much more subtle and restrained. As wine ages in barrel,   the tannins, imparted from the grape skins and stems, become less apparent. The flavors of this wine were less ripe fruit, but still darker fruits, like currant and black cherry, with some earth and iron. Although this wine still had some life left it was nowhere near as  fruit forward as the Atlas Peak.

So which is better?

Kinda like comparing your niece and your grandmother. One is youthful, carefree and full of life, the other has experience/wisdom and has “mellowed” a bit with life and age.

But you love them both. 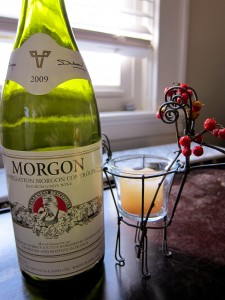 Every year at this time the wine world waits for the Wine Spectator to release their opinion of the top 100 Wines of the Year. Just because a publication rates and ranks them for you doesn’t guarantee you will like them.

However I think this list is a great place to search out value (under $20) wines/producers that you may not have tried.

Here is the short list of value wines from their list. There is something here for every wine type-why not try a few over the holidays?

#21 (94 Rating) 2009 Georges Duboeuf- Morgon Jean Descombes- $15. (Pictured here) If you like Beaujolais Nouveau you will love this wine! It is 100% Gamay grapes but has a little more body since it is a “higher” level wine. Tolerant Taster approved for the holidays.

#23 (93 Rating) 2004 Bodegas Resalte de Peñafiel Ribera del Duero de Restia Crianza Selected Harvest- $15. I haven’t had this wine but I like the producer. If you like Spanish wine, this is a 2004 so it is probably drinking really well right now.  Why not give it a try?

#43 (90 Rating) Gruet Blanc de Noirs New Mexico NV (Non vintage)- $14. One of my favorite inexpensive USA sparkling wine producers. Made in New Mexico? Yes! And it is excellent, for the price. Tolerant Taster approved for the holidays.

#70 (90 Rating) 2009 Morgan Chardonnay Monterey Metallico Un-Oaked-$20. The only Chardonnay on this short list. If you like a cleaner style chardonnay (crisp, fruity) this could be a great find.

#71 (90 Rating) 2010 Bodegas Godeval Valdeorras Vina Godeval 2010-$18. I had to google this one… 100% Godello (native Spanish grape varietal). Sauvignon Blanc lovers should try this as it has similar flavor descriptions (grapefruit, minerality).

#73 (90 Rating) 2007 Fratelli Oddero Barbera d’Alba-$20. Barbera is one of my favorite everyday red wines-due to it’s high acidity it goes really well with pizza, pasta. Chianti alternative. This is on my list to purchase.

As always, please let me know if you like these wines…

Recently, I was fortunate enough to take advantage of an opportunity to taste wine with 2 legends of Napa Valley, Bo and Heidi Barrett.

A little about them… 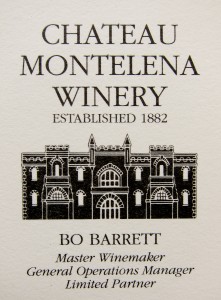 In 1976, Bo Barrett, working at Chateau Montelena with his father, submitted Montelena’s 1973 Chardonnay to the “Judgment of Paris” competition. The Napa Valley wine was up against several top white French Burgundies – and Montelena won. The American victory stunned the wine world and put Napa on the wine map overnight. What’s even more impressive is that the wines were rated by French wine experts.

Click to read more about the Judgement of Paris, and what happened at the “rematch”.

Heidi Barrett, Bo’s wife, was THE wine maker responsible for Screaming Eagle, a California cult Cab, when the wines achieved 99 and 100 point ratings from Robert Parker and  started commanding in excess of $1,000 PER BOTTLE.

At the event, Bo gave his take on biodynamics: “It’s bullshit.” He talked about how difficult it is END_OF_DOCUMENT_TOKEN_TO_BE_REPLACED

Looking forward to Superbowl XLV? I am.

Pittsburgh and Green Bay are “old school” football teams. This is the first title game with 2 teams more than 75 years old. Combined, these two teams account for 9 Super Bowl titles.

Football, at it’s best, is testosterone-fueled, hard hitting action. To compete with this level of intensity we need BIG, BOLD, teeth-staining wine.

Keep reading for a couple of my favorite “gridiron greats”- hearty recipes and wines for the big game.

END_OF_DOCUMENT_TOKEN_TO_BE_REPLACED

I have to admit it, before my first trip to Napa & Sonoma, California wines were not my favorite. My experience with the whites (mostly Chardonnay) was that they were either too oaky, or too buttery. The reds (Cabernet and Cabernet blends) were too tannic and too high in alcohol.

That trip changed my thinking… 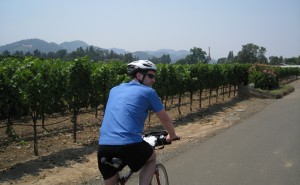 It began when my wife surprised me with a special birthday present- a biking trip of Napa & Sonoma (Napa Valley Bike Tours).  It was a perfect way to experience the vineyards and the wines. Each day we would bike to several smaller, family owned or operated, vineyards. This gave us privileged access to tour and taste with the owners and/or the winemakers.