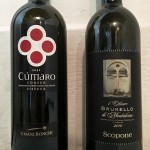 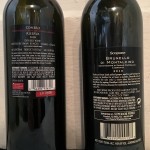 The two most widely grown red grapes of Italy are:

The wines selected to showcase their differences, similarites:

2010 Scopone L’Olivare – This wine is a bit on the modern side (produced in smaller barrels with shorter maceration which produces an earlier drinking wine).

Sangiovese is a high acid grape with what some call “gravely” tannins. The name translates to “blood of Jove” and many believe it’s highest expression comes from the specific Brunello clone isolated by Clemente Santi (Biondi Santi ancestor).

It has red fruit flavors along with distinctive flavors of orange peel, tomato leaf and balsamic. The more “serious” Sangiovese wines that are made for aging have pronounced earthy qualities as well.

Brunello di Montalcino, by law is 100% Sangiovese. 2010 is a phenomenal vintage and prices are reasonable but they will need some time to develop. If you want to drink now decant for a few hours beforehand.

2009 Umanchi Ronchi, Cumaro, Rosso Conero– Umani Ronch is a fairly new winery owned by the a Bianchi-Bernetti since 1959 and Cumaro’s first vintage was 1985. This is 100% Montepulciano fermented with natural yeasts and hand picked.

Montepulciano has some riper red and black fruit flavors like plum and (sour) cherry. The wines can also have a boysenberry flavor which I happily associate with childhood camping trips.

Lower in acidity than Sangiovese the wines are also a little softer and easier to drink, especially Montepulciano d’Abruzzo which I often suggest to the closet Merlot drinkers.