Special invitation to a guided tasting with many top Italian wine producers hosted by Del Posto restaurant. The food and service at this restaurant are impeccable. A perfect venue for an extraordinary event.

The Institute of Fine Italian Wines – The Grandi Marchi is a who’s who of the Italian winemaking world.

If you are in a restaurant or retail shop and need a no-fail recommendation, simply select one of these 19 member wines: 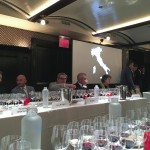 “these are not just good wines…this is a synergy of friendship…of these family brands and their terriors. (They are) defenders of their terroir.

Moderator Gloria Maroti Frazee described this tasting as the ultimate insiders guide of where to go (visit) in Italy. D’ACCORDO! (agreed in italian)

Although I was tempted to post tasting notes for each wine, I found the colorful commentary of the wine presenters much more interesting so I will share that with you. 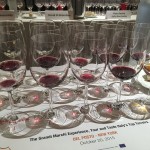 Seema Parthasarathy shared the story of the naming of the wine which I had read before. The name Ca’ Marcanda is a contraction of the word ca’ (casa), meaning “house,” and marcanda, meaning “long negotiations.”. It took them over 10 years of meetings to obtain the property.

Vistamare is a pun on the term “ocean view” which many small hotels advertise to lure guests. The vineyard, and it’s wines have noticeable ocean influence.

Seema also described their use of neutral oak as “a pat of butter” (on rye toast) to indicate the subtle but helpful influence of barrel aging for this wine. 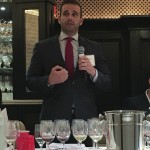 David Di Belardino explained that the he appreciated how the owner is able to “keep his heart in the past but focus on the future.”

Interesting fact:  In Le Marche (the region where their wine is grown) residents consume the most wine in Europe, and, they have the longest life expectancy. 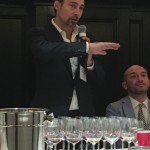 Piero Incisa della Rochetta described Bolgheri (the area that his ancestors chose to plant wine) as “forgotten by man and God…only known by pirates”.

The vineyards of Sassicaia are planted higher than most in the region and on well drained soils because “plants are like us…they don’t like to get their feet wet.”

He also shared that he often says that Tenuta San Guido makes “the most Pinot of Cabernets” because they aim to make them less concentrated with well integrated, finer tannins. This produces a lighter, delicate, expression of a grape that can sometimes be overpowering and unapproachable when young.

Luca De Marco explained that it is the heavy minerals (magnesium and others) that allow Barolo in their terroir to produce so many unique and interesting flavors like balsamic, mint and rose leaves. 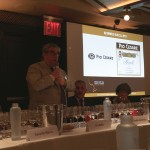 Pio Boffa shared their philosophy “..we do not depend on the skill of the winemaker but rather of Mother Nature,” to explain their non interventionalist style of winemaking.

Pio Cesare is 4th generation- making wine since 1881. As Pio explained “we only put Barolo on the label (nothing more)…we think that is enough.”

Claudio Andreani‘s definition of a “well integrated” for a Super Tuscan, is when you can distinctly taste each component of the wine (Sangiovese, Cabernet, etc.)

The vineyards in Montalcino are closer to the ocean (dotted-line) than the vineyards of Chianti or Montepulcino so they believe they have a coastal influence. They shared that they don’t feel that Sangiovese grown outside of Italy lives up to their standards even though specific clones from Poggio di Sotto where brought into the U.S., and planted on what they believed was the best location (Atlas Peak).

Alberto Tasca related that this wine translates to “red of the Count”, which means “I am making this wine for the Count (me), no one else”. He also called this wine a “Super Tascan” wine which drew laughs from the crown.

Historically the blend of this wine was dictated by the planting of 2 rows of Nero di Troia for every 1 row of Montepulciano, this became a blend of 70%/30%.

Annamaria Palomba described Umbria as “the Green Heart of Italy.”

The traditional blend for Amarone is predominately Corvina, with Rondinella and Molinara. This one also uses 10% Oseleta which has small berries and thick skins which adds tannin and structure which is usually the part played by the Rondinella.

Raffaele Boscaini believes that Amarone should be put away for awhile before drinking. He described the 15-18 year window, after vintage, as “the teenage years…better to leave them (the wines) in their room and wait until they mature.”