South American wines often get lumped together on wine lists and in retail stores, and that is a shame. The two largest wine producing regions of Chile and Argentina have some things in common:

Very little rain-both countries have very little rain fall but have ample water for wine production due to the melting snow and ice of the Andes.

Very low cost of labor– Virtually all grapes are picked by hand.

All of these factors are beneficial to wine growing. They allow them to produce clean wines (hardly any chemical usage), with very ripe fruit, high acid, and soft tannin.

BUT CHILE IS VERY DIFFERENT FROM ARGENTINA…

Chile is like an isolated “island”. The country is bordered by the Pacific Ocean to the West, the imposing Andes mountains to the East, one of the hottest desserts in the world to the North, and the glaciers of Patagonia, to the South.

Chile is a long, skinny nation with greatly varying altitudes and temperatures. This is important because it allows them to grow a wide variety of grapes, very successfully.

Also, they have a very strong influence from France and it’s winemaking culture.

Before Phylloxera devastated the vines of Europe, the French brought clippings of native European varieties to Chile, which have survived, without grafting.

This means that Chile has some of the oldest European-only vines in the world. Old vines generally provide consistency/predictability in wine production and some believe they have a different (better) flavor profile.

Combine all of these factors together and you have some of the best value wines in the world. Also, they have very little disease which makes these wines perfect for Organic wine drinkers who are looking for value.

Here are some wines to try: 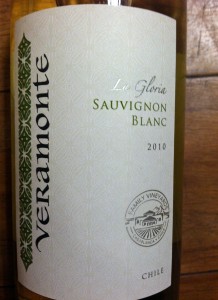 Some of the coolest climates in Chile are near the coast and are best for white wines- try Casablanca* for Chardonnay/Sauvignon Blanc (Veramonte) and San Antonio* for Sauvignon Blanc and Pinot Noir.

The warmest climates are in the Central Valley region, which is protected by the cooling Humboldt current effect on the Pacific Ocean. Here the best wines are reds, Cabernet Sauvignon and “Bordeaux” blends. 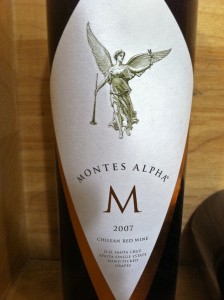 Expensive but worth it!

Hint: the best vines grow on the slopes of the Andes, in rocky soil, as the vines are stressed. 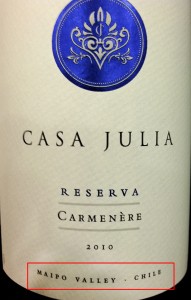 From all over Chile you can find their signature grape, Carmenére. This grape is one of six allowed in France’s famous Bordeaux blends but it has become relatively extinct in France.

The grape was misidentified as a strain of Merlot. They thought it was “Chilean Merlot” and many labeled it as bad Merlot. The reason they thought it was bad is because Carmenére takes a long time to ripen so the winegrowers were picking it too early and not allowing it to fully ripen.

Carmenére produces a lush, fruit driven wine with some spice but soft tannin. Pinot Noir and Merlot fans should try this now!

One thought on “The “skinny” on Chile- Organic Wines, Excellent Value”