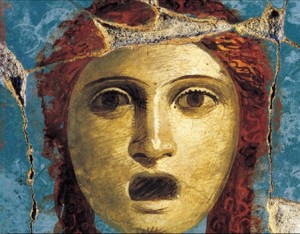 I Recently attended the Pompeii exhibit at Times Square. Unfortunately, the last time we were in Italy we did not have time to see Pompeii/Mt. Vesuvius in person. But we like to have reasons to return!

Bodies frozen on the stairs

Pompeii was a bustling, developed metropolis at the base of Mt. Vesuvius before it erupted in 79 A.D. and buried the entire city under 12 ft of volcanic mud, soil and ash.  Over time they excavated the site and unearthed perfectly preserved human bodies (a little spooky) and the remnants of a modern society. They found pottery, cooking ovens, fashionable jewelry, and plumbing that looks more sophisticated than I have in my 1926 home.

The people of Pompeii enjoyed themselves…they had dice and other gambling games, along with prostitution, and over 200 wine bars!

One of my favorite relatively unknown red wines from that region (Campania) is Lacryma Christi or “Tears of Christ”, which is made from Piedirosso grapes grown on the volcanic soil of Mt. Vesuvius. There are several interesting stories about the religious reference…

One version as Burton Anderson tells it in his book, Vino, The Wines & Winemakers of Italy, “the Archangel Lucifer, cast from heaven, desperately grabbed a piece of it with his fingernails as he fell and placed it on earth as the Gulf of Naples and environs. Noticing the loss, the Lord wept, and where each of his tears fell the first vines grew on earth.”

Another version of the tale proposes that when Jesus was ascending into heaven he glanced at the Earth and saw the Bay of Naples beneath him. He was so moved by the beauty of it he cried tears of joy, his tears falling on the slopes of Mt. Vesuvius.

2006 Lacryma Christi del Vesuvio Rosso DOC is a youthful, easy drinking red wine full of red fruits (cherries, raspberries, strawberries) and some spice (pepper). Fermented 100% in stainless steel, when slightly chilled it is a perfect late summer, early fall red that can be drunk with all types of red meats and is also a great match with Swordfish. This is one to try for people that think they may be sensitive to tannins in red wine!

This wine is meant to be drunk young, within a few years, of purchasing it at your local retailer. Best of all it is inexpensive-I paid under $15!

Mastroberardino is a fantastic and reliable producer of wines in the Campania region. For a splurge, try their Taurasi wine (known as Barolo of the South) made from Aglianico grapes. It is a beautiful powerhouse of a wine.

One thought on “Wines of Pompeii- Death, Destruction and the Tears of Christ…”