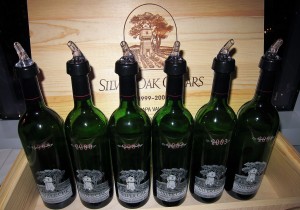 The year, or vintage, listed on a the wine label is the year that the grapes were harvested. It is a snapshot of the entire year, in a bottle, (the weather in the region, the weather in the vineyard, and it’s effect on the fruit.)

In wine regions with cooler climates, like Germany or France, there is wider variation in the growing conditions so it is more difficult to consistently get fully ripe fruit. Experts say vintage is VERY important with these wines.

In hotter wine regions like California, the conditions are much more reliable and therefore the wines vary less from vintage to vintage. Let’s see if this is true.

The best way to taste the TRUE difference vintage makes, in a wine, is to drink them side by side, in a vertical tasting. Basically drinking many glasses of the same wine, from different vintages. I know…I know, it sounds like work, but someone has to do it.

I was invited to a vertical tasting, by friends from #Westchester Wine Meetup, of a classic California Cabernet, Silver Oak. My wife and I biked around Napa several years ago and tasted wines at Silver Oak so I know a little about them. 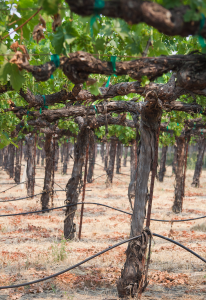 • They produce full bodied wine, yet they make it ready to drink upon release.

• They use 100% American Oak, which gives the wine a spicy quality.

• Silver Oak Cabernet vines are HUGE and are actually a part of the Tolerant Taster web page header above.

• They started out making one wine that contained only 100% Cabernet Sauvignon. Now they produce two wines:

2. Silver Oak Napa Valley- a Bordeaux style Blend that is mostly Cabernet Sauvignon (around 80%). See my tasting notes for actuals.

Now…can I tell the difference from one year to another…

In a word “yes”. At first all seemed to smell very similar but I definitely had my preferences after drinking them. 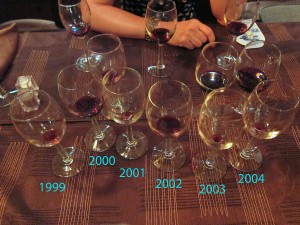 The wines I liked best

Here are the wines we tasted and how I ‘rated’ them. As shown in the photo above, the wines closest to me I liked the most. The number after the wine is the vintage rating.

Let me know your thoughts…