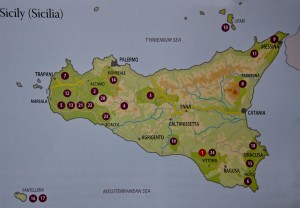 I was asked to put together a wine tasting to help my in-laws get prepared for their upcoming trip to Sicily. Whenever I am with friends and family I like to be informal, but any time you are drinking several different wines, it’s nice to compare them and learn.

When I discover new wine regions I like to start with varietals. These are wines mostly made from a single grape variety. It is much easier to determine whether you like a specific grape flavor, when it is not blended with others.

Setting up a tasting 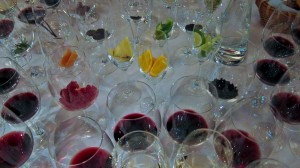 Wine Flavors- from another event I attended

I like to gather together as many different flavors as possible for people to see if they can identify them in the wine. Put them on a plate, or better , in a glass to hold the aroma. Here is a good place to start…

If you aren’t sure what flavors could be in the wine Google the wine, or grape, and see what others think are in there.

Have some food on hand

Buy bread, meats, and/or cheeses to help soak up some of the alcohol and also because as they say in Italy, “food and wine are part of the same sentence”. My favorite mother-in-law had some excellent antipasta on hand to complement the Italian wines.

A little bit about Sicily and their wines:

Sicily is the most southern ‘island’ of Italy-the piece of land being kicked by the boot.

People who live on Sicily are Sicilian first, and Italians second. They have their own way for doing everything.

Sicily is one of Italy’s largest wine producing regions but historically it has not been know for creating quality wines. The quality can be inconsistent but if you find a good quality producer they are EXCELLENT values (inexpensive).

A few regions in Sicily have been granted quality status (DOC, DOCG) but many sicilian producers fail to recognize it. The regional government of Sicily sets it’s own standards. A “q” on the wine label is an indication of a quality wine in that region.

The island is also known for Marsala which is a Port-style fortified wine produced in both dry and sweet styles. It is made from Cataratto, Grillo and Inzolia.

The wines in the order we drank them: 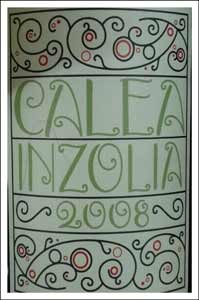 2007 Baglio Dosa Grillo (around $12)– The least favorite of the group. It was a little “flabby” which is a fancy term to say that it did not have enough acidity to balance it out. Also a little “hollow” (lacking flavor).

2009 Calea Inzolia Salento (around $10)-The best white wine, as evidenced by the quickly emptied bottle. It had nice, crisp acidity, good citrus flavor (lemon, orange). My wife, who has a very keen sense of smell said, “sea spray”. This can be common with wines that are produced on coastal vineyards and after she identified it I smelled it too. Maybe it was because we were at the beach?

2009 Cusumano Nero d’Avola (around $12)– pronounced ‘NEH-roe DAH-voe-lah’, is the most famous grape of Sicily. This red wine is made in a variety of styles, from lightly colored and flavored, to richer and more full bodied. This one was medium bodied and had some nice red fruits (cherry, strawberry) and some spice. In the summer I like to chill red wines (15-30 minutes in the fridge). This one would be great with burgers or grilled chicken.

Florio Marsala Sweet (around $8 for 375ml)– Fortified wines (Port, Sherry, Marsala) can be an aquired taste but there is a reason why they are often drank at the end of the meal- they are generally more concentrated (stronger flavor) and are higher in alcohol. This is why you should pour smaller glasses. This one had a nice nutty flavor.

The wine tasting was a great way to taste our way around Sicily I only wish I was going with them.