Getting ready for VINO 2011, (by researching drinking some Italian wine) made me again realize that Italian terminology, used commonly on bottles, can be interesting and confusing to most consumers. Below is a very good reference, compiled by another website (http://dobianchi.com) that I found helpful.

azienda- landed property, estate, domestic work, from the Spanish hacienda, from the Latin facienda meaning things to be done from facere, to do.

The term azienda means business and is used to denote a company or firm in Italian.

• An azienda agricola is a farming estate, when they make wine they mainly work with their own grapes. Their wines are labeled “estate bottled at…” or “imbottigliato all‘origine da…” (in Italian)

• An azienda vinicola is a transformer of grapes into wine, they therefore do not need to own any land and are buying at least 51% of the grapes they are turning into wine. On the label their wines will ONLY read  “bottled by…” or “imbottigliato da…” (in Italian)

ca’, see below entry for casa.

The word cantina has a wide variety of applications in Italy (often used for restaurants and food stores, as well as wineries) and can be found across Italy to denote wine cellar.

The term casa is used throughout Italy as a winery designation and is often abbreviated as ca’, as in Ca’ di Pian (love this wine). It’s important to note that it’s often erroneously abbreviated as Cà.

cascina– farm house or other structure used to house livestock or farm tools, structure used to store cheese and other dairy products. The term is used primarily in northern Italy and especially in Piedmont to denote a farmhouse or dairy farm.

When wine is produced it is stored in a cantina.

fattoria– farm, from the Latin factore, literally maker, from facere meaning to do.

You find usage of fattoria generally in Tuscany where it can denote a winery or a farm, keeping in mind that most wine-producing estates in Tuscany also grow olives and other crops.

The term is used today primarily in Tuscany where it denotes, literally, a seat of [agricultural] power, hence the late Latin origin of the word, potere, literally power or possession (who also share kinship with the Latin etymon). According to the Cortelazzo etymological dictionary, the word first appears in the Middle Ages in northern Italy.

poggio– hill, from the Latin podium, meaning an elevated place, a height.

The usage of poggio in Tuscany is documented dating back to the thirteenth century and the term appears in Dante. It refers not to a hill itself but to the man-made terraces on the slopes of hills, the purpose of these terraces being to be able to cultivate plants (olives, vines, even vegetables sometimes) on the flat part.

There are many related words like poggiolo, poggiuolo, and poggione. A ‘poggione’ is literally a big terrace; a ‘poggino’ or ‘poggetto’ a little one

ronco– literally a growing site on a hill used for farming, from the Latin runco, meaning to weed out, root up; to weed, clear of weeds, akin to the Friulian dialectal term ronc.

To my knowledge, ronco is used exclusively in Friuli. 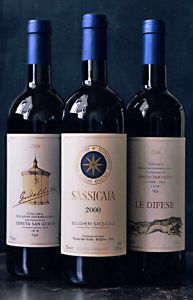 tenuta– a [land] holding or property.

Tenuta is a term that you see applied across northern and central Italy. Its relation to the pre-industrial age, when land ownership denoted nobility, is clear.

As in Tenuta San Guido. Love this wine maker!

Pronounced VEEN-y’eye-OH-loh (plural VEEN-y’eye-OH-lee), vignaiolo is used to denote a winery that uses estate-grown fruit in the production of its wines.